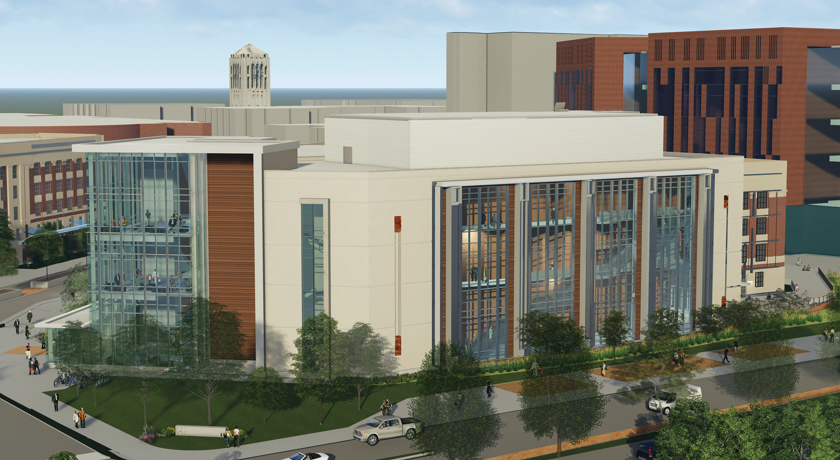 The Board of Regents approved design plans for a new 100,000-square-foot classroom building on Central Campus that will serve up to 10,000 students each day.

The construction is part of a project that would also renovate the historic Alexander G. Ruthven Museums Building. The new facility — to be called the Central Campus Classroom Building — will replace a 34,000-square-foot addition built onto the Ruthven Building in 1964. The building will provide 1,400 classroom seats in a variety of learning spaces, including a 550-seat auditorium, a 200-seat classroom “in the round” and other team-based learning rooms.

“In many fields, the way we teach has changed, becoming more interactive, more collaborative and using new technologies,” says Provost Martin Philbert. “This new building will support these innovations, facilitate and enhance student engagement and contribute to teaching and learning in the future.”

Aside from classroom space, the project also includes the renovation and reuse of the approximately 135,000-square-foot main Ruthven Building, former home of the Museum of Natural History. The former museum facility will house space for academic and research initiatives, an approximately 200-person multipurpose room, and administrative spaces for central administration staff currently located in the Fleming Administration Building, including the president and other executive officers.

The project is scheduled to be completed in the fall of 2021. In addition to approving the design plans, the Regents also voted to remove the word “museums” from the official name of the Alexander G. Ruthven Museums Building. The Museum of Natural History moved to the new Biological Sciences Building that opened last year.